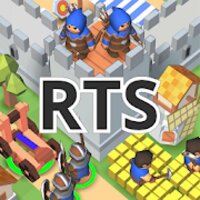 RTS Siege Up! - Medieval War (MOD, Unlocked) - Fun strategy simulator on android devices. The essence of the game is to take control over a small and little-known kingdom, be engaged in mining resources as well as recruiting new units, thereby increasing both the number of army and the number of workers. However, do not forget about the dangers that lurk outside your castle, as the game progresses build and expand the borders of your future empire, repulse all attacks from competing kingdoms, as well as perform simple tasks.