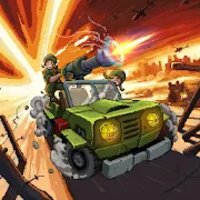 Jackal Squad - Arcade Shooting (MOD, Unlimited money) - Classic arcade action game for android, which is made in the beloved by players retro style. The plot of the game is set during the Second World War, take control over a small squad, which consists of several people, manage the mobile transport along the way fighting in the occupied territory of the enemy. As you advance in the game, destroy enemy troops as well as search for captured comrades-in-arms. Do not forget about the possibility of improvement, after each successfully completed mission install and repair your armored vehicle.