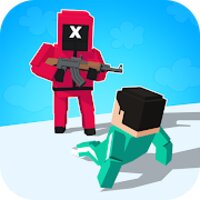 Squid.io - Red Light Green Light Multiplayer (MOD, Unlimited money) - Multiplayer arcade competition on android, which contains many popular mini survival games. The essence of the games is to win competitive tasks against other players from around the world, the winner receives valuable prizes and distinctive marks. Test your attentiveness and reaction, on which depends the outcome of the competition, also the game has a very good by the standards of graphics and a pleasant soundtrack.