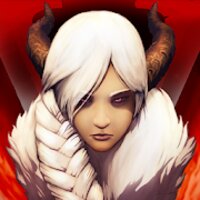 Grimvalor (MOD, Unlocked) - Atmospheric RPG on android device, which will bring the player to the captured kingdom of Vallaris. Take control of a little-known hero who has to overcome a long way among hostile opponents. Find out what really happened to the fairy kingdom, find the imprisoned king along the way, destroying all opponents on the way. The game has high-quality graphics and unobtrusive music that will accompany the player as he progresses in the game. Also, do not forget about the improvements and wandering merchants, which from time to time will appear in the most unexpected places, improve your equipment and also buy newer weapons.

Obb for the game Grimvalor v1.2.1 (MOD, Unlocked) unpack from archive into /sdcard/Android/obb/