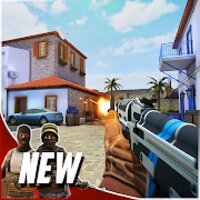 Hazmob FPS : Online multiplayer fps shooting game (MOD, Unlimited money) - An exciting online shooter for android, which will provide players with the opportunity to fight in large vast locations. The main feature of the game is a wide range of in-game modes and a large number of weapons, take part in dynamic battles against tens of thousands of players from all over the world. The game also supports the ability to create your own unique faction, in which players will have to fight with other groups for territory and valuable resources.