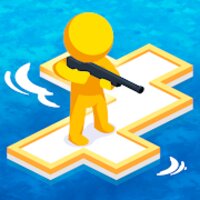 War of Rafts: Crazy Sea Battle (MOD, Unlimited money) - Immerse yourself in an epic sea adventure that takes place in vast water locations. Control a small raft, which needs not only to be expanded, but also to recruit as many crew as possible by installing protective structures along the way. A battle against several players takes place on one location, the essence of the game is to remain the last survivor, for this look for debris, with the help of which you equip and expand your floating fortress.
The controls are made in the best traditions of the io genre, with just one click, choose the direction in which the movement will be made, and the high-quality soundtrack of the game is also worth special attention.