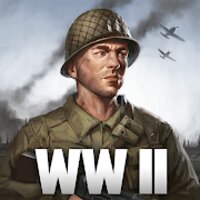 World War 2 - Battle Combat (FPS Games) (MOD, Radar) - Incredibly exciting dynamic simulator for android, which is made in the setting of the Second World War. Immerse yourself in exciting battles between two warring countries, choose a side and engage in historical battles that take place in more than 10 vast locations. The game has wonderful 3D graphics with high-quality and sophisticated visual effects, it is also worth paying special attention to the game modes, which are currently present more than 6. For completing special tasks you are assigned a new rank, which opens up more extensive opportunities both in the choice of weapons and defending your hero.

Enemies are displayed on the radar!