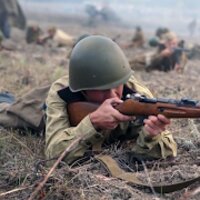 Ghosts of War: WW2 Shooting game (MOD, Unlimited Ammo) - Realistic action with a first-person view, which is made in the style of the Second World War, take part in the largest battles between tens of thousands of players from all over the world. at this time in the game there are 3 large, well-developed locations, among which there are various types of military equipment of those times. Before starting the battle, choose the opposing side, but the main advantage of the game is the ability to pump and improve your arsenal, completing simple tasks, do not forget about timely improvement and increase of your battle rank, for faster pumping and mastering the game, each player can purchase a battle pass, which will significantly speed up progress in the game. It is also worth noting separately high-quality 3D graphics, with high-resolution textures, and realistic special effects will not leave indifferent fans of this genre of applications.