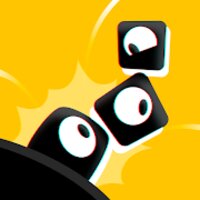 Evo Pop (MOD, Free shopping) - Take control of a small colony of colored Evoes that live in colonies and are capable of reproducing at high speed. The main task of the player will be to develop his colony as quickly as possible, the larger their size and population, the greater the chance of victory and superiority over other players. Plunge into exciting battles between three players in a small and cramped location, the winner is the one who managed to survive at the end of the round. Absorb your opponents and become larger, at the right time, do not forget to divide into smaller creatures to increase your population.