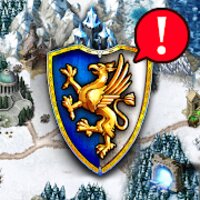 Heroes & Magic - A tactical turn-based strategy for android, which will take the player into a fantasy world over which a powerful previously unknown danger looms, many creatures burn peaceful settlements daily and also terrorize local residents. Your main task will be to defend your empire while expanding its borders. use your tactical capabilities in large arenas, hire the best warriors and other mythical creatures. It is also worth noting the possibility of studying magical elements, which can be freely used on the battlefield against your opponent.