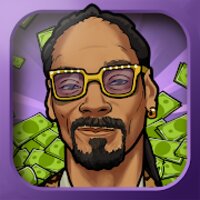 Snoop Doggs Rap Empire (MOD, Unlimited money) - An exciting rap simulator for android, in which you have the opportunity to become a real star and build your career as a successful performer. As you progress through the game, write new compositions along the way, improving both your musical equipment and improving your talent. After successful performances, conquer new previously inaccessible cities and so on to the very heights, also do not forget about the constant improvement of your studio, because most of the compositions will be created there.