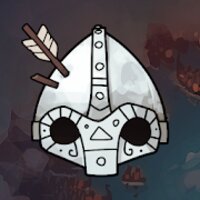 Bad North: Jotunn Edition (MOD, Unlimited money) - An atmospheric strategy for android, which will take the player to the distant past, in which you have to defend your small island from the constant attacks of the Vikings. Build your defense in such a way that it is most difficult for opponents to get to your kingdom, create your own unique tactics that will contribute not only to the smallest losses among your servants, but also to the complete destruction of the enemy from your possessions.