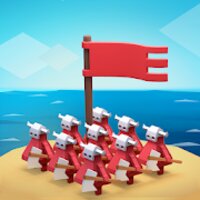 Island War (MOD, Easy Win) - An exciting multiplayer strategy game that has conquered millions of players from around the world in a matter of days. Join numerous battles that take place in all corners of the planet, fight with other players, or unite thereby creating the strongest alliances. At the initial stage of the game, one small island will be available to you, on which your original army will be based, but you should from time to time attack other similar players, conquering new territories along the way. But do not forget in the timely strengthening of their borders and positions, which will be able to repeatedly hold the onslaught of enemies.