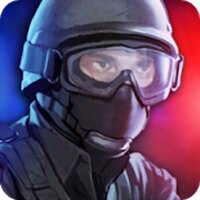 Counter Attack Team 3D Shooter (MOD, Unlimited money) - A wonderful first-person action shooter that is a reworked version of the popular Counter Strike. Dive into dynamic battles between terrorists and special forces in more detailed locations. The game has a huge selection of quality balanced arsenal, the appearance of which can be changed beyond recognition, dozens of unique locations as well as a single-player campaign. But at any time you can always demonstrate all your shooting skills against other players from around the world, the game supports multiplayer up to 10 players in a single battle.