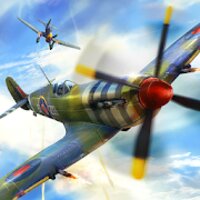 Warplanes: WW2 Dogfight (MOD, Unlimited money) - A realistic simulator in which you take on the responsibilities and role of a World War II combat fighter pilot. Before starting the game, choose a side for which you have to fight, completing the tasks assigned to you, your pilot will advance in rank, the higher your rank, the more valuable the reward will be at the end of the completed location. In addition to a single passage in the game, there is multiplayer, in which you will have the opportunity to show all your piloting skills as well as unique tactics against other players from all over the world.