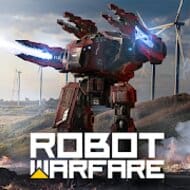 Robot Warfare (MOD, Unlimited Ammo) - A dynamic multiplayer action game in which you have to take on the role of a pilot of a combat robot. Take part in bloody battles 6 by 6, think over tactics and hit opponents in completely unexpected places. Use the unique characteristics of your robot to lead the team to victory. In addition to the hot battles, the game will be able to please with abundant pumping, a huge assortment of robots, as well as high-quality 3D graphics.