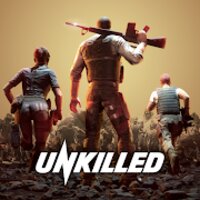 UNKILLED - Zombie Games FPS (MOD, Unlimited Ammo/No Reload) - This game will conquer all fans of dynamic battles against zombies. You will fight against zombies in the world famous city of New York. More than 100 missions and more than 50 levels await you, in each of which new zombies will await you. You need to fight and save the survivors. You will also have a huge selection of weapons, which will greatly help you in battles.