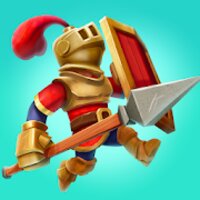 Ancient Battle (MOD, Unlimited money) - This game will send the player to the distant past, in which your journey will begin, take control of the hero and try to recruit as many fighters as possible into your own army, as soon as you recruit the first unit, the enemy will attack you, reflect all attacks, accumulate an army and fight with the most powerful king, with each destroyed enemy, the game card will gradually close, this will force all players to fight at the end of the round, which will determine the winner.

For correct operation of MOD
After successfully completing the training, each purchase will double the money.