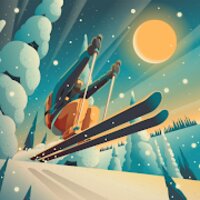 Grand Mountain Adventure: Snowboard Premiere (MOD, Unlocked) - Realistic sports game for your Android device, in which you can conquer mountain peaks by snowboarding and skiing. You will be given a wide choice of levels, as well as competitive activities, for the completion of which you can get a lot of points and other valuable improvements. As you progress in the game, challenge other players along the way, taking prizes and leading places on the Grand Mountain leaderboard.