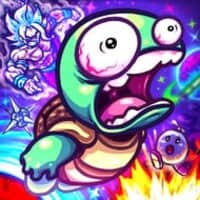 Super Toss The Turtle (MOD, unlimited money) - An exciting game for your Android device, in which you will play a brave turtle. Your task will be to launch it as far as possible, flying over all obstacles and knocking down opponents on the fly. You can also pump not only weapons but also a variety of starting devices. All this can be purchased at the store, so you need to pass the levels as best you can and not leave a single opponent alive.