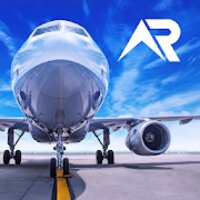 RFS - Real Flight Simulator (MOD, Unlocked) - A wonderful simulator on Android, in which you will play the role of an airplane pilot. Your task in this game is to take control of the aircraft and perform various missions. You will be able to control many aircraft and show your pilot skills. The game has excellent three-dimensional graphics with realistic models of both the aircraft themselves and the environment.