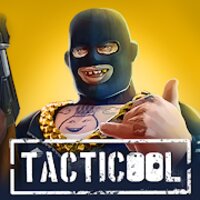 Tacticool - Fascinating action game on Android in which you have to find yourself in the role of a calculating commander, gather a team of brave fighters and lead it through many different battles. Destroy enemies using various types of vehicles and other no less deadly devices. The game has a large selection of weapons and a variety of equipment, before each battle, carefully think over your tactics and escape routes in case of an unsuccessful battle.

Obb for the game Tacticool v1.38.0 unpack from archive into /sdcard/Android/obb/