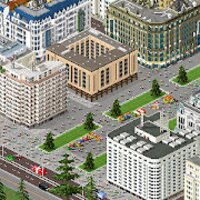 TheoTown (MOD, Unlimited money) - In this game you have to build your own dream city, in which you have to build new roads as well as other important structures. Make your city the most colorful on the entire planet, be engaged in beautification and reconstruction of old dilapidated buildings, which have long been out of use. Also pay attention to the wishes of the local residents, from time to time fulfilling their wishes you manage to raise not only your rating, but also to get the strongest support.


Run the game without internet!
After the first launch, skip the tutorial!