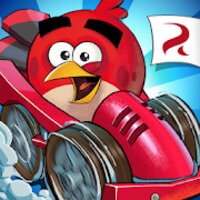 Angry Birds Go! (MOD, Unlimited Money) - An arcade racing simulator for android, which has incorporated many characters familiar to players from all the Angry Birds trilogies. Take control of one of the many characters in the game, and then fight for the title of the most skillful and fast character in the series. The game has modern 3D graphics and is endowed with colorful special effects, it is also worth noting the possibility of improving your vehicle as well as purchasing newer, faster models.