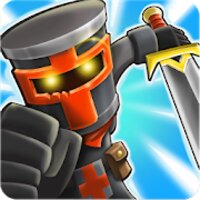 Tower Conquest (MOD, Unlimited Money) - An excellent strategic action game for android, in which all your agility and tactical skills will be required from you, because in this game you will fight back the monsters that climb from the underworld. A certain portal opened and the monsters began an attack on the previously peaceful lands and its population. You will be assigned the role of a brave commander, who began to defend your territories, create your invincible army, which will consist only of the most powerful warriors and other mythical creatures.