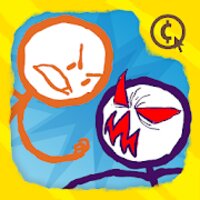 Draw a Stickman: EPIC 2 (MOD, Immortality) - A colorful continuation of the logic arcade game with drawing elements. But before starting the journey, you have to draw your main character with your own hands, over which in the future you will have to take control. The developers decided not to touch on the basic mechanics of the game, which means that the main character still has to solve puzzles and fight dozens of types of enemies, for this use your imagination and a wide variety of colored pencils, draw workarounds and self-defense. But solving some of the riddles will require much more effort in comparison with the previous version of the game.