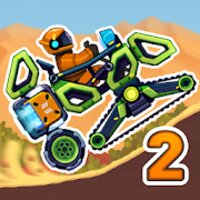 Rovercraft 2 (MOD, Menu) - Create your own car that will overcome all obstacles in its path. This game is a good continuation of the first part, which scored more than 10 million downloads in the shortest possible time, the developers did not hesitate to decide to release a more improved version of their first creation. As in the first part of the game, you need to design your lunar rover so that it can easily overcome any obstacles and irregularities, install powerful engines and improved springs on it, which will give your creation more improved cross-country ability. At this time, the game boasts a huge number of levels and a variety of locations that differ from each other not only in style but also in a unique landscape.