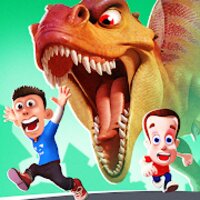 Rampage : Giant Monsters (MOD, Free shopping) - An exciting multiplayer action game for android that will take the main character to the near future. Become the lead of the main space company NextDNA, which is hard at work on its new project to revive prehistoric creatures, your role is to take control of the reanimated prehistoric animal and then set off to the nearest planet for further development. At this time, the game has more than 16 unique heroes, with their own abilities, fight with other players along the way, pumping strength and endurance.